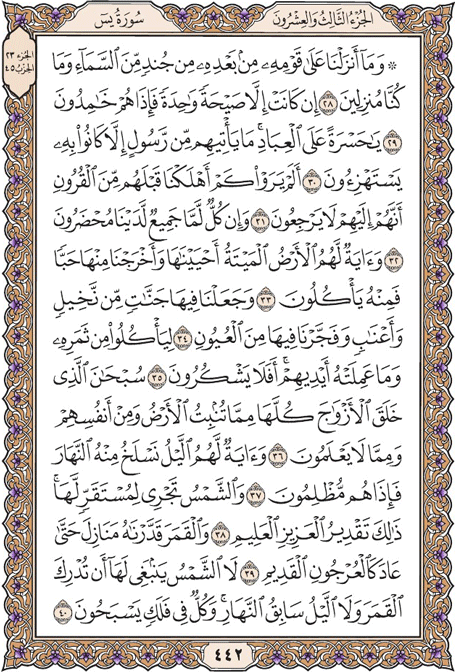 We did not send down any army against his people from heaven, nor did We have to send one.

There was just one blast, and they were extinguished.

Alas for men! No apostle ever came to them but they made fun of him.

Have they not seen how many generations have We destroyed before them who will not return again?

They will all be brought together before Us.

There is a sign in the dead earth for them which We quicken, and produce from it grain which they eat.

We have laid out gardens of dates and grapes upon it, and made springs of water flow,

So that they may eat of its fruit; yet it was not done by their hands. Then why do they not acknowledge thanks?

All glory to Him who created pairs of everything that grows from the earth, and out of themselves, and other things they do not know.

And there is a sign in the night for them. We strip off the day from it and they are left in darkness,

While the sun keeps revolving in its orbit. This is the dispensation of the mighty, all-knowing (God).

We have determined the stations of the moon, so that (after its wanderings) it returns as a dried up inflorescent spike of dates.

Neither can the sun overtake the moon, nor the night outpace the day: Each of them keeps coursing in its orbit.