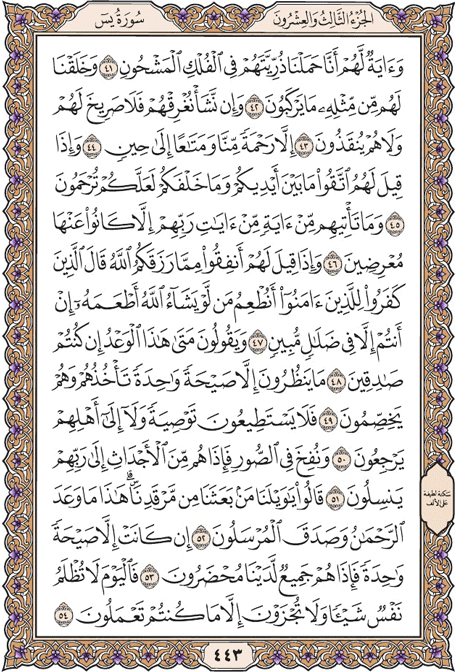 That We bore their progeny in the laden ark is a sign for them;

And We made similar vessels for them to ride.

We could have drowned them if We pleased, and none would have answered their cry for help, nor would they have been saved,

Unless by Our benevolence, to reap advantage for a time.

When it is said to them: "Beware of what is before you and what is past, that you may be treated with kindness;"

None of the signs of their Lord ever comes to them but they turn away from it.

When they are told: "Spend of what God has given you," the unbelievers say to those who believe: "Why should we feed those whom God should have fed if He pleased?" You are only in palpable error.

And they say: "When will this promise come to pass, if what you say is true?"

They are only waiting for a single blast that will seize them, but they will go on contending.

Then they would not be able to make a will, or go back to their people.

When the trumpet blast is sounded they will come out of their graves and hasten to their Lord,

Saying: "Ah woe, who has roused us from our sleep?" This is what Ar-Rahman had promised, and whose truth the apostles had affirmed.

It would be but a single blast of the trumpet, and they would all be arraigned before Us.

No soul will be wronged the least that Day, nor would be recompensed but only for what it had done.