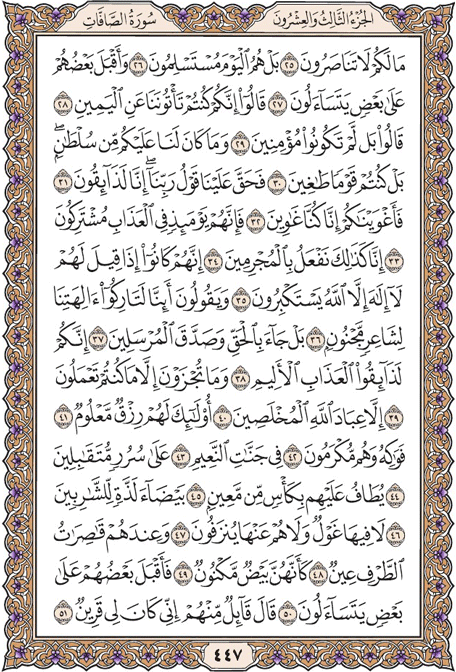 "What is the matter with you that you do not help each other?"

They will submit to questioning then,

And some of them will confront the others,

Saying: "It were you who imposed yourselves upon us."

They will say: "No, you were the ones who would not believe.

We had no power over you. In fact, you were a people rebellious.

The sentence of our Lord has come true for us. We have certainly to taste (the punishment),

For we had led you astray. In fact we ourselves were astray."

So, they will become partners in punishment.

That is how We deal with sinners.

They were those who, when it was said to them, "There is no god but God," behaved with insolence,

And said: "Should we abandon our gods for the sake of an insane poet?"

Not in the least. He has brought the truth and confirmed the other messengers.

You will indeed taste a painful punishment,

And be rewarded but only for what you had done,

Except the chosen creatures of God,

Whose provision is predetermined --

Fruits of every kind, and they will be honoured

In gardens of delight,

(Sitting) on couches, face to face,

With cups from a flowing stream being passed around,

Neither dulling the senses nor intoxicating,

And with them maidens of modest look and large lustrous eyes,

Then one turned to the other in an enquiry.

Said one of the speakers: "I had a friend