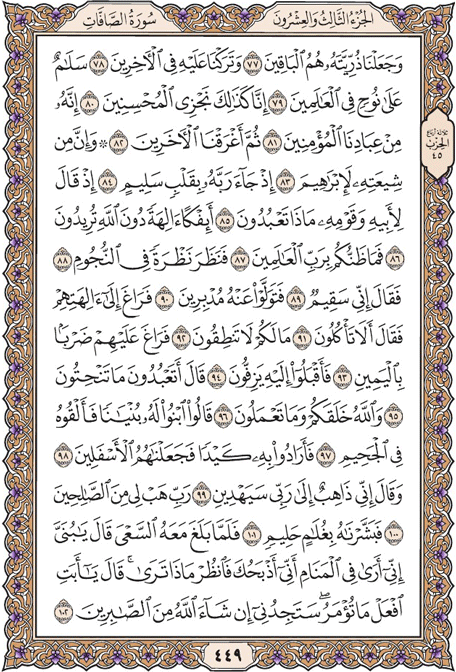 And made his progeny survive,

And left (his name) for posterity.

Peace on Noah among all men.

That is how We reward those who do good.

Surely he was among Our faithful creatures.

Afterwards We drowned the others.

And Abraham indeed was of his inducement,

When he came to his Lord with a heart compliant,

When he said to his father and his people: "What is this you worship?

Why do you solicit false gods instead of God?

What do you imagine the Lord of the worlds to be?"

Then he looked up at the stars (they worshipped),

But they turned their backs on him and went away.

Then he turned towards their gods and said: "Why do you not eat (of these offerings)?

What is wrong with you that you do not speak?"

Then he started striking them down with his right hand.

So the people descended upon him.

"Why do you worship these you carve yourselves," he asked,

"When God has created you and what you make?"

"Build a pyre for him and throw him into the raging fire."

So they contrived a plot against him, but We made them abject.

And he said: "I am going away to my Lord who will show me the way.

So We gave him the good news of a clement son.

When he was old enough to go about with him, he said: "O my son, I dreamt that I was sacrificing you. Consider, what you think?" He replied: "Father, do as you are commanded. If God pleases you will find me firm."