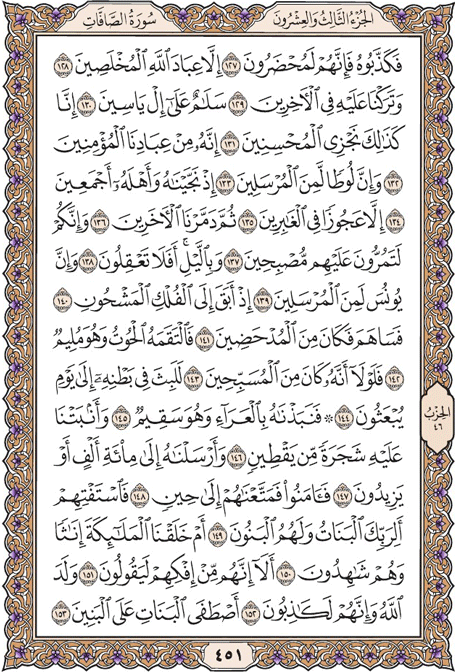 They denied him, and will surely be brought to punishment,

Except the chosen creatures of God.

And We left his (memory) for posterity.

Peace be on Elias.

That is how We reward those who do good.

He is truly among Our faithful devotees.

Verily Lot was one of the apostles,

Wherefore We saved him and his entire family

Except an old woman who was one of those who stayed behind.

Then We destroyed the others.

You pass by (their habitations) in the morning

Or at night. Then how is it you do not understand?

Verily Jonah is one of the apostles.

When he fled on the laden ship,

And lots were cast (when a storm overtook them), he was rejected, (and thrown overboard).

Then he was swallowed by a large fish as he was worthy of blame.

Had he not been one of those who struggled hard,

He would have stayed in its belly till the day the dead are raised.

So We cast him, sick, on a barren shore,

And We made a gourd tree grow over him.

We sent him to a hundred thousand men or more,

And they came to believe; so We allowed them to enjoy the good things of life for an age.

Now ask them if their Lord has daughters, and they sons?

Or did We make the angels females, and they witnessed it?

Is it not a lie invented by them when they say:

"God has begotten (children)?" They are liars indeed!

Does He prefer sons to daughters?