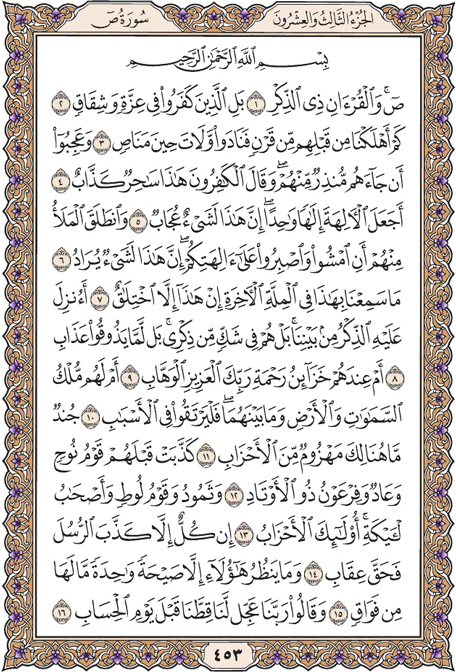 SAD. I CALL to witness the admonishing Qur'an.

But the unbelievers are still full of pride and hostility.

How many generations have We destroyed before them who cried (for mercy) when it was too late for escape.

They were surprised that one of them had come to them as warner; and the unbelievers said: "He is a deceiving sorcerer.

Has he turned so many gods into one deity? This is indeed a strange thing!"

And their leading chiefs said: "Remain attached to your gods. There is surely some motive behind it.

We never heard of it in the former faith. It is surely a fabrication.

To him of all of us has the Reminder been sent down?" They are still in doubt about My admonition; but they have not tasted My punishment yet!

Do they have the stores of the mercy of your Lord, the mighty and munificent?

Or is the kingdom of the heavens and the earth and all that lies between them, theirs? Then let them climb up the ladders (to the heavens).

They will be one more army vanquished among the many routed hordes.

Even before them the people of Noah, 'Ad, the mighty Pharoah,

And the Thamud, the people of Lot, as well as the dwellers of the Wood, had denied. These were the hordes.

Of all these there was not one who did not deny the messengers. So My retribution was justified.

They await but a single blast which will not be repeated.

Still they say: "O Lord, give us our share before the Day of Reckoning."