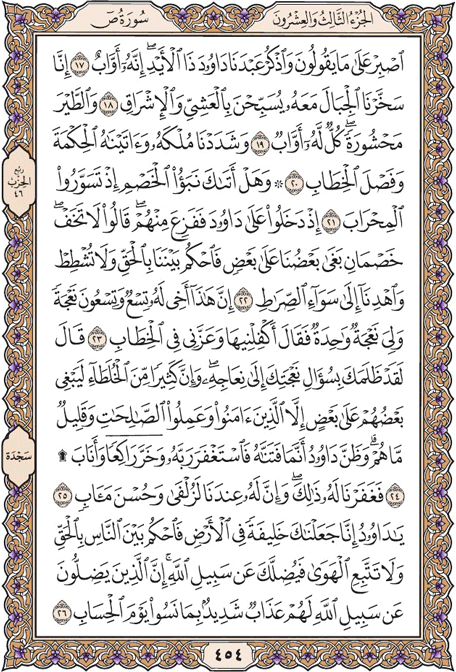 Bear with patience what they say, and remember Our votary David, man of strength. He surely turned to Us in penitence.

We subjugated the chiefs (of tribes) to struggle day and night with him,

And the levied Tair. They were all obedient to him.

So We further strengthened his kingdom, and bestowed wisdom on him, and judgement in legal matters.

Have you heard of the litigants who jumped over the wall into his chamber?

When they came before David, he was frightened of them. "Do not be afraid," they said. "The two of us are disputing the wrong one has done the other. So judge between us with equity, and do not be unjust, and guide us to the right path.

This man here is my brother. He has ninety and nine ewes while I have only one. He demands that I should give him my ewe, and wants to get the better of me in argument."

(David) said: "He is unjust in demanding your ewe to add to his (many) ewes. Many partners are surely -- unjust to one another, except those who believe and do the right; but there are only a few of them." It occurred to David that he was being tried by Us, and he begged his Lord to forgive him, and fell down in homage and repented.

So We forgave him. He has surely a high rank with Us and an excellent place of return.