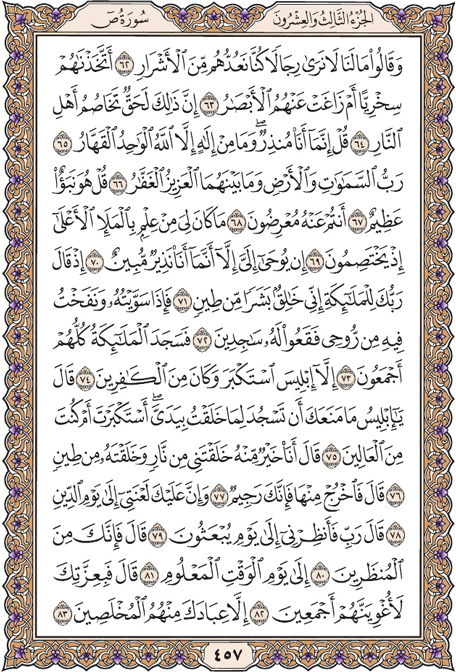 And will add: "O what has happened to us that we do not see the men we counted among the wicked.

Did we laugh at them (for nothing), or our eyes fail to pick them out?"

This contending of the inmates of Hell will surely be real.

Say: "I am only a warner, and there is no other god but God, the one, the omnipotent,

Lord of the heavens and the earth and all that lies between them, all-mighty, all-forgiving."

Say: "This is a momentous message,

To which you pay no heed.

I had no knowledge of the higher Assembly when they discussed it among themselves.

Only this has been revealed to me that I am a distinct warner.

When your Lord said to the angels: "I am going to create a man from clay;

And when I have made him and have breathed into him of My spirit. Fall down in homage before him."

Then the angels bowed before him in a body,

Except Iblis. He was filled with pride and turned an unbeliever.

Said (God): "O Iblis, what hindered you from adoring what I created by My own authority? Are you too proud, or too high and mighty?"

He said: "I am better than he. You created me from fire, and him from clay."

Upon you will be My damnation till the Day of Doom."

He said: "O Lord, give me respite till the day the dead rise from their graves."

(God) said: "You have the respite

Till the appointed day."

He said: "By Your authority, I will lead them astray,

Other than the chosen ones among Your creatures."