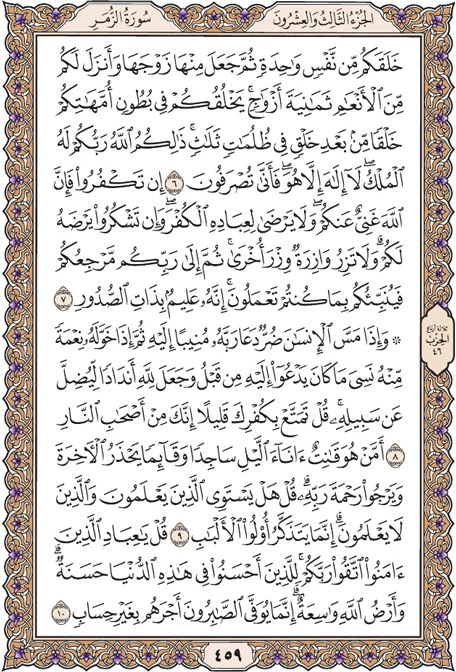 He created you from a single cell, then from it created its mate; arid provided eight varieties of cattle for you. He formed you in the mother's womb, formation after formation in three (veils of) darkness. He is God your Lord. His is the kingdom. There is no god other than He. How then can you turn away?

If you are ungrateful, then remember! God is independent of you, and He does not favour ingratitude on the part of His creatures. If you are grateful He will be pleased with you. For no one who carries a burden bears another's load; and your returning is to your Lord, when He will tell you what you used to do. Surely He knows what is in the hearts.

When man is afflicted with adversity he turns to his Lord, and prays to Him. But when He bestows His favour on him, he forgets what he prayed for before, and sets up others as compeers of God to mislead (people) from His way. Say: "Take advantage of your denying for a while: You will be among the inmates of Hell."

Can one who prays in the watches of the night, bowing in homage or standing attentive, fearful of the life to come, and hoping for the mercy of his Lord, (be like one who does not)? Say: "Can those who know, and those who do not know, be equal? Only they think who are wise."

Tell them: "O my creatures who have come to belief, have fear of displeasing your Lord. There is good for those who do good in this world, and productive is God's earth. Only those who persevere will get their reward measureless."