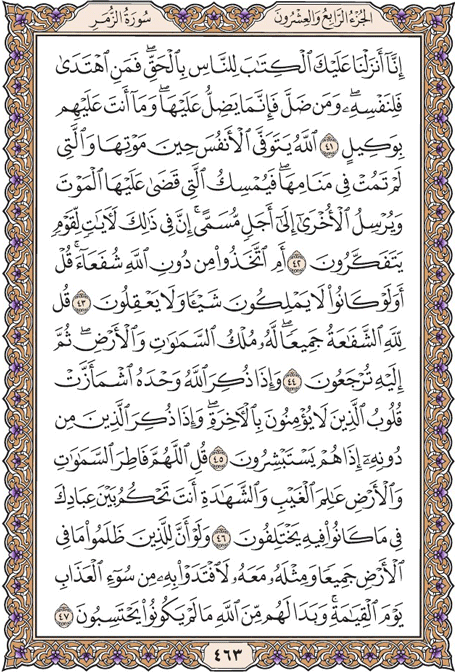 We have Sent down this Book to you with the truth for all mankind. So, he who comes to guidance does so for himself, and he who goes astray does so for his own loss; on you does not lie their guardianship.

God gathers up the souls of those who die, and of those who do not die, in their sleep; then He keeps back those ordained for death, and sends the others back for an appointed term. Surely there are signs in this for those who reflect.

Have they appointed intercessors other than God? Say: "Even though they have no power in the least, nor do they understand?"

Say: "God's is the intercession entirely; His is the kingdom of the heavens and the earth; then to Him you will return."

When God alone is mentioned the hearts of those who do not believe in the life to come, are filled with resentment. But when others are mentioned apart from God, they begin to rejoice.

Say: "O God, the originator of the heavens and the earth, the knower of the unknown and the known, You alone will judge between Your creatures for things they differed about."

Even if the sinners possessed whatever is in the heavens and the earth, and as much more, they would offer it to ransom themselves from the torment of the Day of Resurrection; yet what they did not even imagine would appear to them from God;