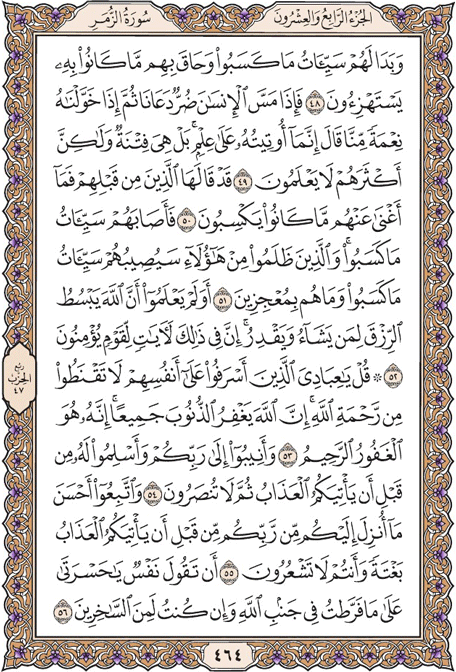 And the evil of what they had earned would become visible to them; and what they used to mock would surround them from all sides.

When a man is in trouble, he prays to God; but when We bestow a favour on him he says: "It has come to me through my acumen." In fact, this is an illusion, but most men do not know.

Those before them had also said so, and yet nothing of what they did availed them in the least.

Then the worst of what they had done overtook them. So will the evil deeds of those who are sinners among them recoil back on them. They cannot get the better (of Us).

Do they not know that God enhances or restricts the provision of any one He will. Surely there are signs in this for people who believe.

Say: "O creatures of God, those of you who have acted against your own interests should not be disheartened of the mercy of God. Surely God forgives all sins. He is all-forgiving and all-merciful.

Turn towards your Lord and obey Him before the punishment comes upon you when you will not be helped.

Follow the best of what has been revealed to you by your Lord before the punishment overtakes you suddenly and you are caught unawares,

Lest a soul should say: "Alas, I was heedless of God and only laughed;"