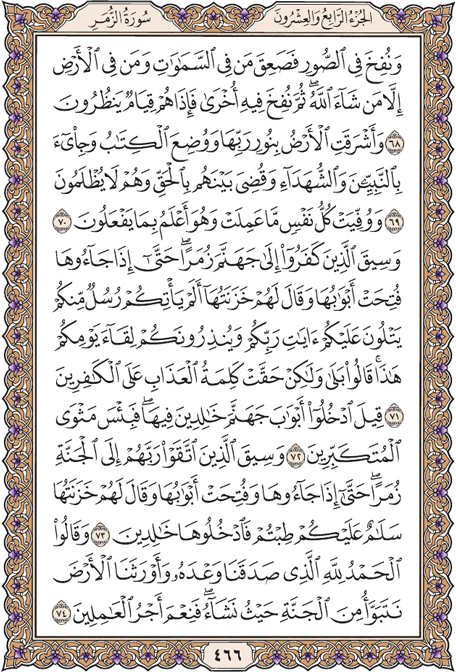 When the trumpet blast is sounded whoever is in the heavens and the earth will swoon away, except those God please. When the blast is sounded the second time, they will stand up all expectant.

The earth will light up with the effulgence of her Lord; and the ledger (of account) will be placed (in each man's hand), and the apostles and the witnesses will be called, and judgement passed between them equitably, and no wrong will be done to them.

Each soul will be paid in full for what it had done. He is cognisant of what you do.

The unbelievers will be driven into Hell in groups till, when they reach it and its doors are opened up, its keepers will say to them: "Did not apostles of your own come to you reciting your Lord's revelations, warning you of this your day of Doom?" They will answer: "Yes;" but the sentence of punishment was justified against the unbelievers.

"Enter the gates of Hell," they will be told, "and there abide for ever." How grievous a destination for the haughty!

Those who were mindful of their duty to their Lord will be driven in groups to Paradise, till they reach it and its gates are opened, and its keepers say to them: "Peace be on you; you are the joyous. So enter here to live for ever."

They will say: "All praise be to God Who has fulfilled the promise He had made to us, and bequeathed to us this land for dwelling in the garden wheresoever we like." How excellent the recompense for those who act!