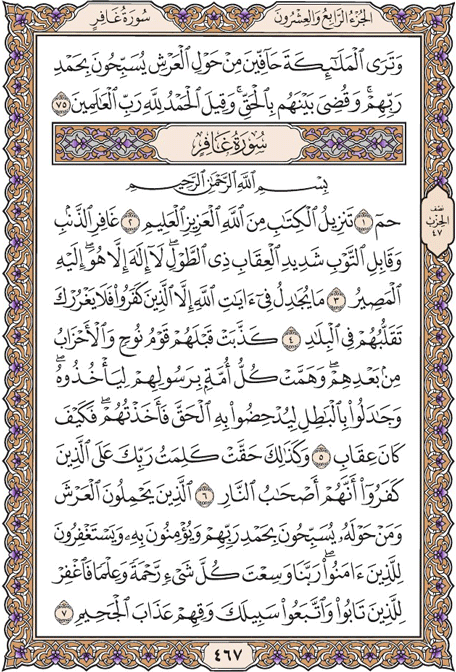 You will see the angels hover round the Throne, singing the praises of their Lord; and justice will be done between them equitably, and it would be said: "All praise to God the Lord of all the worlds."

The revelation of this Book is from God the all-mighty and all-knowing,

Forgiver of trespasses, acceptor of repentance, severe of retribution, lord of power. There is no god but He. Towards Him is your destination.

Only the unbelievers dispute the revelations of God. So do not let their activities in the land deceive you.

The people of Noah had denied before them, and many factions after them. Every nation has intrigued against its apostle and afflicted him, and argued with false arguments to condemn the truth. Then I seized them. How was then My retribution!

In this way the sentence of your Lord against the infidels that they would be the inmates of Hell, was justified.

The bearers of the Throne, and those around it, sing the praises of their Lord and believe in Him, and seek forgiveness for those who believe: "O our Lord, Your mercy and knowledge embrace everything; so forgive those who turn to You in repentance and follow Your path; and preserve them from the torment of Hell.