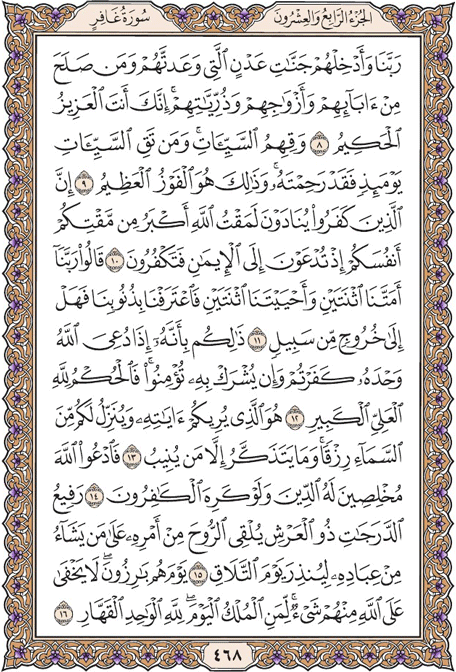 Admit them, O Lord, to the garden of Eden which You promised them, and those of their fathers, spouses and progeny who are upright. You are truly all-mighty and all-wise.

Protect them from evil; and whosoever You preserve from evil on that Day shall have surely received Your mercy. This will be the great triumph."

Those who disbelieve will certainly be told: "God's displeasure was greater than your disgust of your selves when you were called to belief and refused to believe."

This has come upon you because when God alone was invoked you disbelieved; but when partners were associated with Him, you believed. But judgement belongs to God, the all-high and supreme.

It is He who shows you His signs, and sends you food from the heavens. Yet none takes a warning except him who turns to Him.

So call on God with exclusive obedience, howsoever the unbelievers may dislike it.

Most exalted of position, Lord of power, He directs inspiration by His command to any of His creatures as He will, to warn (men) of the Day of Meeting,

The day when they will come out (of their graves), with nothing of them hidden from God. Whose then will be the kingdom? -- God's, the one, the omnipotent.