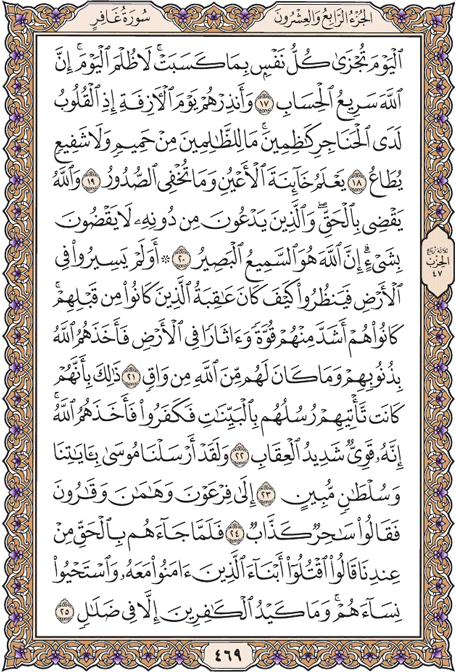 Each soul will be recompensed that Day for what it had earned. There will be no depriving on that Day. Surely God is swift at reckoning.

Warn them of the coming day inevitable, when hearts would jump to the throats, filling them with anguish. The sinners will have neither friend nor intercessor whose (word) will be heeded.

Known to Him is the treachery of the eye, and what the breasts conceal.

God decides with justice. But those they call apart from Him can not adjudge in the least. Verily God is all-hearing, all-perceiving.

Have they not travelled on the earth that they could see what happened to those before them? They were greater in strength than they, and have left behind them traces on the earth. Yet they were seized by God for their sins, and had none to protect them against God.

This was so because their apostles came with clear proofs to them, but they refused to believe. So they were seized by God. Surely God is powerful, unrelenting in retribution.

We sent Moses with Our signs and clear authority

To Pharaoh, Haman and Qarun. But they said: "He is only a deceiving sorcerer."

And when he brought the truth to them from Us, they said: "Slay the sons of those who believe with him, and spare their women." But the unbelievers' stratagem is bound to fail.