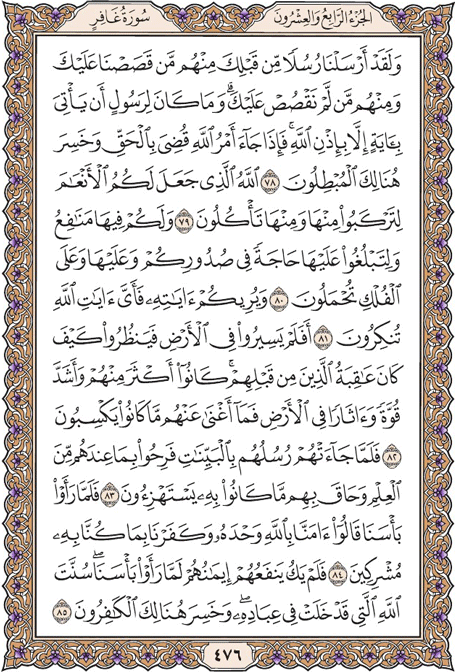 Surely We have sent apostles before you, some of whose account We have related to you, and that of some We have not told you. But no apostle was given a miracle unless God dispensed. But when the decree of God comes the sentence is passed with justice; and the lovers of vice and vanity will then come to grief.

It is God who made the cattle for you so that some you ride and some you eat.

There are advantages for you in them, so that you may satisfy your needs through them, and may be borne upon them and on ships.

He shows His signs. How many of God's signs will you then deny?

Have they not travelled in the land and seen how was the end of those before them who were far more numerous than they and more strong, and have left behind them traces on the earth. And yet nothing of what they did profited them.

For when Our apostles came to them with clear proofs, they boasted and exulted at the knowledge they possessed; but what they used to mock recoiled back on them,

So that when they saw Our might, they said: "We believe in God the one and single, and reject those we associated (with Him)." --

But then their affirming served them nothing after they had seen Our torment. This is the law of God that has prevailed among His creatures, Then the unbelievers went to rack and ruin.