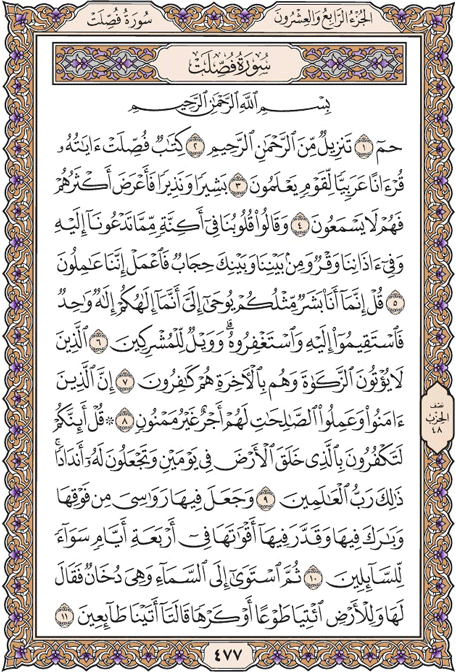 A revelation from the most benevolent, ever-merciful,

A Book whose verses have been distinguished and explained, a lucid discourse for people who understand,

Announcing happy news and warnings. And yet most of them are averse and do not listen,

And say: "Our hearts are immured against what you call us to. There is a deafness in our ears, and a veil lies between us and you. So act (your way), we are acting (ours)."

Say: "I am a man like you, (but) it is revealed to me that your God is one God, so take the straight path to Him, and ask Him to forgive your sins. Woe to the idolaters

Who do not give a due share of their wealth for the welfare of others, and do not believe in the Hereafter.

But those who believe and do the right, will have a continuing reward.

Say: "Do you refuse to believe in Him who created the earth in two spans of time, and set up compeers to Him, the Lord of all the worlds?

He placed firm stabilisers rising above its surface, blessed it with plenty and growth, and ingrained the means of growing its food within it, sufficient for all seekers, in four spans.

Then He turned to the heavens, and it was smoke. So He said to it and the earth: "Come with willing obedience or perforce." They said: "We come willingly."