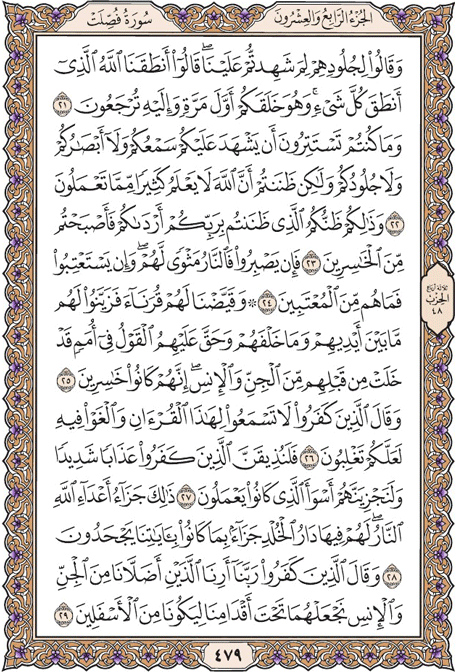 And they will say to their bodies: "Why did you testify against us?" They will answer: "God, who gave all things power of articulation, made us speak. It is He who created you the first time, and to Him you will return.

You did not hide your (doings) so that your ears or eyes or persons should not testify against you. In fact you thought that God did not know the things you used to do.

It is this notion you had of your Lord that caused your ruin, and you are lost."

Even if they are patient, their abode is Hell; and if they beg for favour, none will favour them.

We had assigned to them close companions who made their past and present look attractive to them; and the fate that had once befallen the communities of jinns and men before them was justified upon them. They were indeed bound to perish.

The disbelievers say: "Do not listen to this Qur'an, and shout away (its reading); you may haply prevail."

We shall make the disbelievers taste the severest punishment, and retribute them for the worst that they had done.

This is the requital for God's enemies: Hell, where they will have their lasting home, as punishment for denying Our revelations.

Those who disbelieve will say: "O Lord, show us those among the jinns and men who had led us astray that we may trample them underfoot and make them wholly abject."