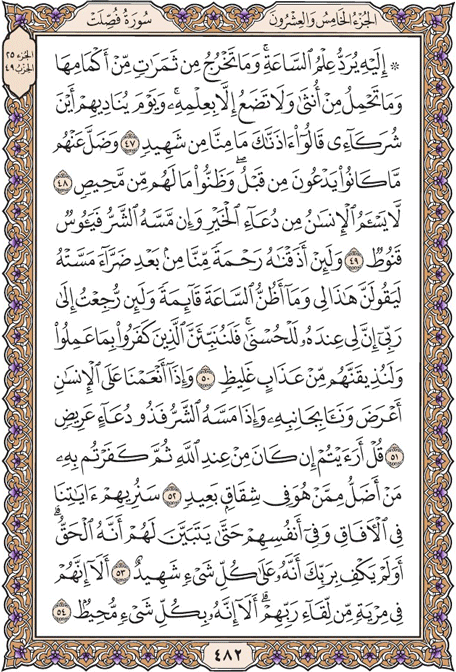 He alone has knowledge of the Hour (of change): No fruit comes Out of its spathe, no female conceives or gives birth, but He has knowledge of it. The day He will call them (and ask): "Where are the compeers (you ascribed to Me)?" They will answer: "We profess to You not one of us can vouch for them."

And those they used to worship will leave them in the lurch, and they will realise there is no escape for them.

Man never tires of praying for good; but if evil assails him he begins to despair.

If We give him a taste of Our favour after some distress he has known, he says: "It was my due. I cannot imagine the Hour will come. And even if I go back to my Lord, there will surely still be the best for me with Him." We shall tell those who do not believe what they used to do, and inflict on them a heavy punishment.

When We show Our favours to man he moves away and turns aside; but when in trouble he prays a great deal.

Say: "Just think. If this is from God and you deny it, who will be in greater error than he who is in open dissent?"

We will show Our signs to them in the horizons of the external world and within themselves, until it becomes clear to them that it's the truth. Is your Lord not sufficient? He is a witness over all things.

In truth they are in doubt that they will ever face their Lord. Do they not know that He surrounds all things?