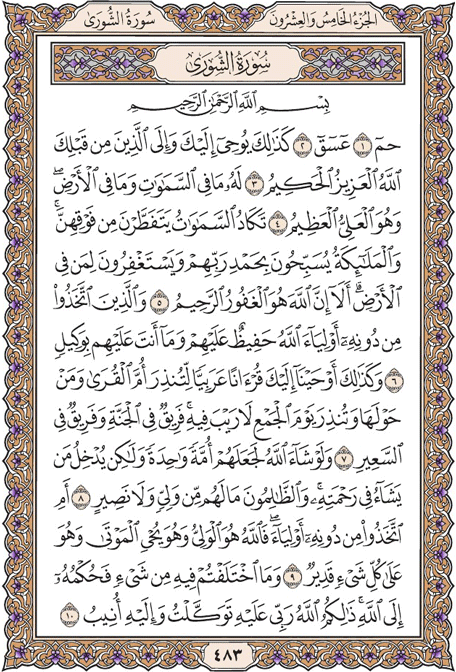 So has God, all-mighty and all-wise, been revealing to you and to others before you.

Whatever is in the heavens and the earth, belongs to Him. He is all-high and supreme.

The skies are near to bursting asunder above them (for awe of Him), and the angels sing the praises of their Lord, imploring forgiveness for the dwellers of the earth. Is it not that God is forgiving and merciful?

Those who have taken protectors other than Him, are watched over by God. It is not for you to be their guardian.

We have, therefore, revealed to you the eloquent Qur'an that you may warn the people of the Metropolis, and those who live around it, of the Day of Gathering, of which there is no doubt, (when mankind would be assembled) some in Heaven, some in Hell.

If God had pleased He would have made them one community of belief; but He admits whom He please to His grace; yet the sinners have neither friend nor helper.

Have they taken others beside Him as protectors? It is God who protects; it is He who gives life to the dead, for He has power over everything.

In whatever matter you disagree the ultimate judgement rests with God. This is God, my Lord; in Him have I placed my trust, if to Him I turn.