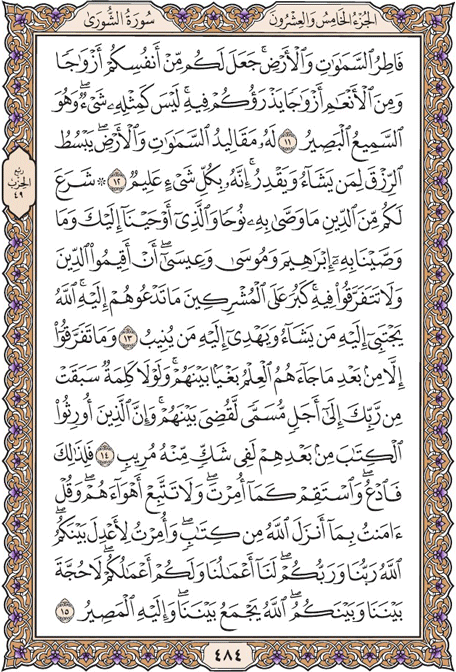 Originator of the heavens and the earth, He has made your consorts from among you, and made pairs of cattle. He multiplies you in this way. There is no other like Him. He is all-hearing and all-seeing.

He holds the keys of the heavens and the earth. He increases or decreases the provision of any one He will. He has knowledge of everything.

He has laid down for you the (same) way of life and belief which He had commended to Noah, and which We have enjoined on you, and which We had bequeathed to Abraham, Moses and Jesus, so that they should maintain the order and not be divided among themselves. Heavy is to idolaters what you invite them to. God chooses whom He please for Himself, and guides to Himself whoever turns to Him.

Yet they did not differ about it until knowledge came to them, through rivalries among themselves. If the Word of your Lord, (staying) it for a time ordained, had not preceded it, the matter would have been settled among them. But those who came to inherit the Book after them are also in doubt and disturbed about it.

Yet to that (law) you should call them, and be constant as commanded. Do not follow their passing whims, but say: "I believe in whatever Scripture God has revealed, and I am commanded to act with equivalence among you. God is our Lord and your Lord. To us our actions, to you your deeds. There is no dispute between you and us. God will gather us all together, and to Him is our returning."