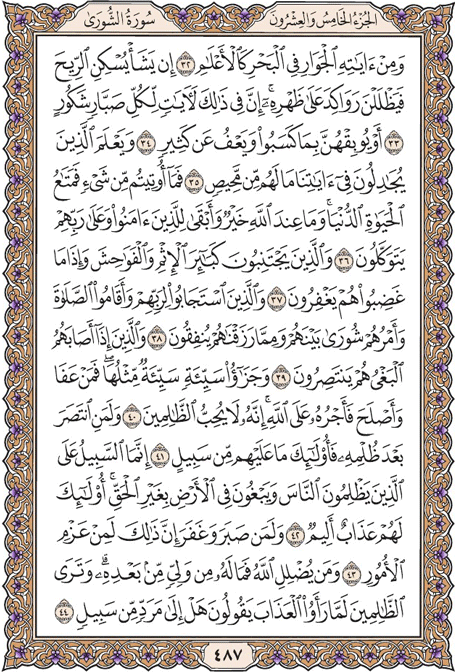 He could stop the wind if He pleased, then they would be stranded on its surface. Surely there are signs in this for every one who perseveres and is grateful.

Or He could wreck them for what they have done; yet there is much that He pardons.

Let those who dispute Our signs know that there is no way of escape for them.

Whatsoever you have been given is only this life's merchandise; but what is with God is better and more lasting for those who believe and place their trust in their Lord,

Who avoid the deadly sins, immoral acts, and forgive when they are angered,

Who obey the commands of their Lord and fulfil their devotional obligations, whose affairs are settled by mutual consultation, who spend of what We have given them,

And those who defend themselves when they are wronged.

The retribution of evil is the equal of evil (done); yet those who forgive and rehabilitate will be rewarded by God. Verily He does not like those who do wrong.

If one avenges himself after he has been wronged, there is no way of blaming him.

Blame lies on those who oppress, and terrorise the land unjustly. For them there is painful punishment.

But he who bears with patience and forgives, surely complies with divine resolve.

He whom God leads astray has no one except God to protect him. You should see the sinners when they face the punishment. They will say: "Isn't there a way of going back?"