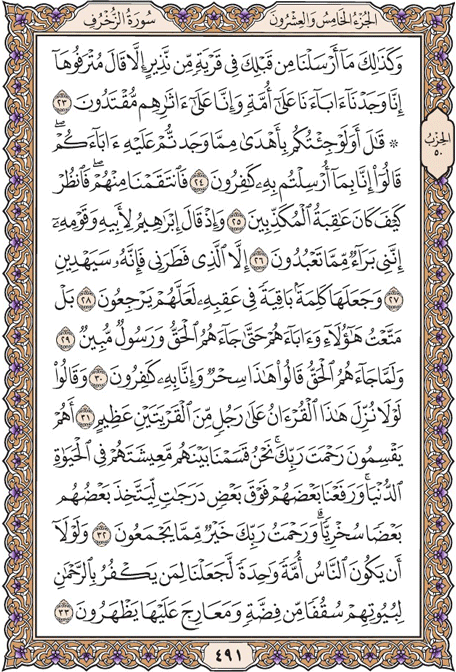 Thus, We never sent an admonisher to a settlement before you but the decadent among them said. "We found our fathers following this way, and we are walking in their footsteps."

"Even if I bring you a better guidance," he rejoined, "than the one you found your fathers on?" Still they said: "We do not believe in what you have brought."

Then We punished them. So look at the fate of those who denied.

When Abraham said to his father and his people: "I am rid of what you worship

Other than Him who created me. He will show me the right way."

This is the legacy he left to his descendants so that they may turn (to God).

In fact, I allowed them and their fathers to enjoy this life till the truth, and the apostle preaching it lucidly, came to them.

Yet when the truth had come to them, they said: "This is sorcery. We shall never believe in it."

They also said: "Why was this Qur'an not sent down to some great man of the two cities?"

Are they the ones who dispense the favour of your Lord? It is He who apportions the means of livelihood among them in this world, and raises some in position over the others to make some others submissive. The favours of your Lord are better than what they amass.

Had it not been that all people would become one community (of unbelievers), We might have given those who disbelieve in Ar-Rahman roofs of silver for their dwellings and (silver) stairs for mounting,