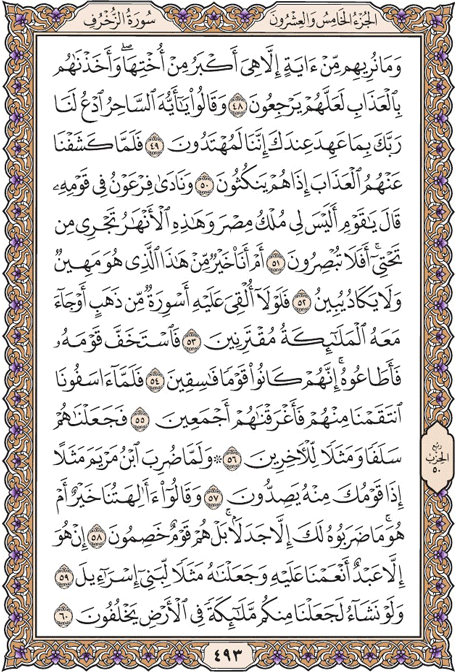 (Even though) each miracle that We showed them was greater than the other. So We seized them with chastisement so that they may turn back.

But they said: "O sorcerer, call on your Lord for us in accordance with the compact He has made with you. We shall certainly come to guidance."

Yet no sooner did We take away the affliction from them than they broke their pledge.

And the Pharaoh said to his people: "O people, is not mine the kingdom of Egypt and these rivers that flow at my feet? Can you still not comprehend?

Am I (not) better than him who is contemptible, and cannot even express himself clearly?

Why were then no bracelets of gold shed upon him from above, or angels sent down as a retinue with him?"

Thus he made light (of the matter) to his people, and they obeyed him. They were certainly wicked.

But when they roused Our anger We inflicted retributive punishment and drowned them all,

And made them a precedent and example for posterity.

When the example of Mary's son is quoted before them, your people cry out at it,

And say: "Are our deities better or he?" They say this only for disputing. Surely they are a contentious people.

(Jesus) was only a creature whom We favoured and made an example for the children of Israel.

If We pleased We could have put angels in place of you as trustees on the earth.