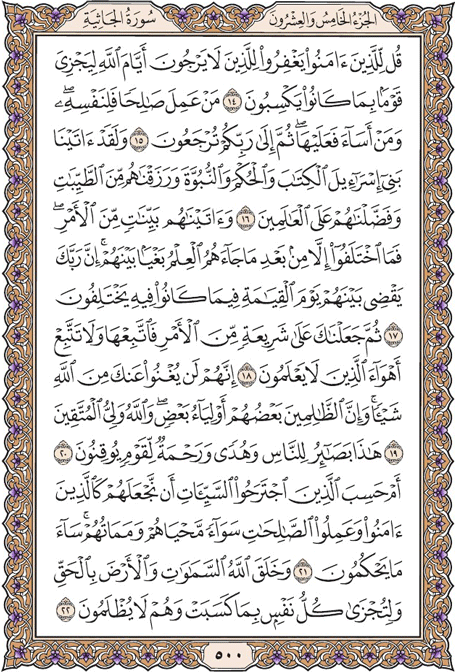 Tell the believers to forgive those who do not fear the visitations of God, so that He may requite the people for their deeds.

He who does good does so for himself; and he who does evil suffers the consequence thereof. You have then to go back to your Lord.

We gave the children of Israel the Book, and the judgement and the prophethood, provided them with good things, favoured them over other people,

And gave them a clear exposition of Our laws. And they did not differ until after knowledge came to them, through mutual jealousies. Verily your Lord will judge between them on the Day of Judgement in what they differed about.

We have put you on the right way in the matter (of divine law). So follow it, and do not follow the wishes of those who are ignorant.

They will not avail you in the least against God. Surely the wicked are each other's friends, but God befriends those who fear and follow the right path.

These are precepts of wisdom for men, and guidance and grace for people who believe with certainty.

Do those who seek evil think that We shall make them equal in life and death to those who believe and do good? How bad is the judgement that they make!

God has created the heavens and the earth with reason, so that He may reward each soul in accordance with what it has done; and no wrong will be done to them.