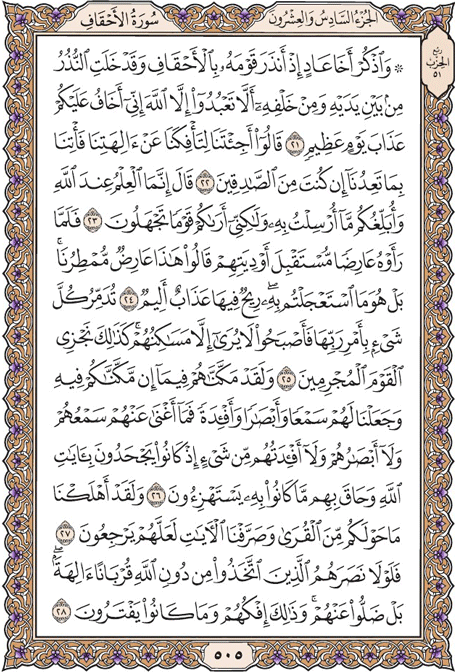 Remember (Hud) the brother of 'Ad. When he warned his people in Ahqaf -- though many a warner had come and gone before and after him: "Do not worship any one but God, for I fear the punishment of an awful day for you,"

They said: "Have you come to turn us away from our gods? Then bring upon us what you predict for us, if you are a man of truth."

He said: "Only God has the knowledge. I only convey to you what I have been sent with. But I see you are a foolish people."

So when they saw it as a cloud advancing towards their valleys, they said: "This is just a passing cloud that will bring us rain." "No. It is what you were trying to hasten: The wind which carries the grievous punishment!

It will destroy everything at the bidding of its Lord." So in the morning there was nothing but their empty dwellings to be seen. That is how We requite the sinners.

We had strengthened them as We have not strengthened you, had given them ears and eyes and hearts; but nothing stood them in good stead, neither their ears nor eyes nor hearts, for they rejected the signs of God, and were seized by what they had mocked.

We have destroyed habitations all around you, having explained Our signs in different ways to them that they may turn back.

Why then did the gods they had taken apart from God as propitiators, not come to their aid? In fact they strayed away from them. It was all a lie what they had contrived!