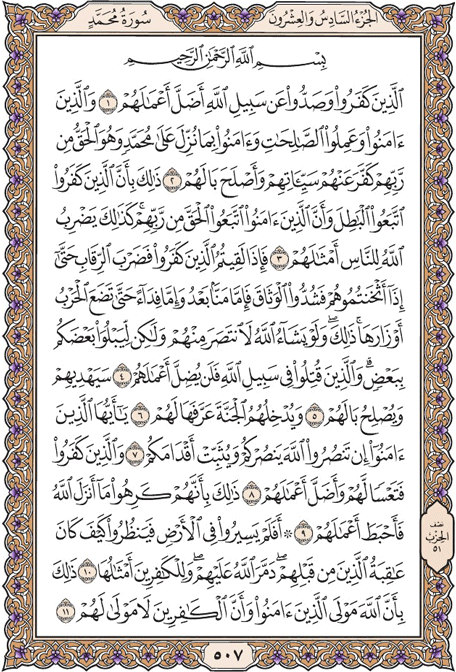 THOSE WHO DISBELIEVE and obstruct (others) from the way of God will have wasted their deeds.

But those who believe and do the right, and believe what has been revealed to Muhammad, which is the truth from their Lord, will have their faults condoned by Him and their state improved.

That is because those who refuse to believe only follow what is false; but those who believe follow the truth from their Lord. That is how God gives men precepts of wisdom.

So, when you clash with the unbelievers, smite their necks until you overpower them, then hold them in bondage. Then either free them graciously or after taking a ransom, until war shall have come to end. If God had pleased He could have punished them (Himself), but He wills to test some of you through some others. He will not allow the deeds of those who are killed in the cause of God to go waste.

He will show them the way, and better their state,

And will admit them into gardens with which he has acquainted them.

O you who believe, if you help (in the cause of) God He will surely come to your aid, and firmly plant your feet.

As for the unbelievers, they will suffer misfortunes, and their deeds will be rendered ineffective.

That is so as they were averse to what has been revealed by God, and their actions will be nullified.

Have they not journeyed in the land and seen the fate of those before them? Destroyed they were utterly by God; and a similar (fate) awaits the unbelievers.

This is so for God is the friend of those who believe while the unbelievers have no friend.