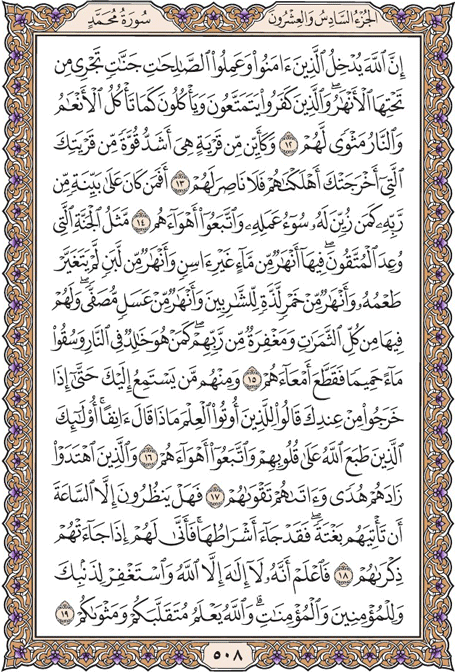 Verily God will admit those who believe and do the right into gardens with streams of water running by. But the unbelievers revel and carouse and subsist like beasts, and Hell will be their residence.

How many were the habitations, mightier than your city which has turned you out, which We destroyed; and they did not have a helper.

Can one who stands on a clear proof from his Lord, be like one enamoured of his evil deeds and follows his inane desires?

The semblance of Paradise promised the pious and devout (is that of a garden) with streams of water that will not go rank, and rivers of milk whose taste will not undergo a change, and rivers of wine delectable to drinkers, and streams of purified honey, and fruits of every kind in them, and forgiveness of their Lord. Are these like those who will live for ever in the Fire and be given boiling water to drink which will cut their intestines to shreds?

There are some who listen to you; but as soon as they go from you they say to those who were given knowledge: "What is this he is saying now?" They are those whose hearts have been sealed by God, and they follow their own lusts.

But those who are rightly guided will be given greater guidance by Him, and they will have their intrinsic piety.

Do they wait for any thing but the Hour (of change), that it may come upon them suddenly? Its signs have already appeared. How then will they be warned when it has come upon them?

Know then, therefore, there is no god but He, and ask forgiveness for your sins and those of believing men and women. God knows your wanderings and your destination.