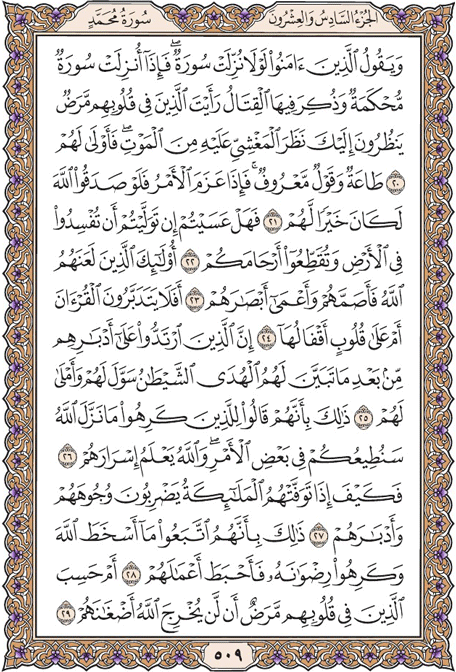 Those who believe say: "How is it no Surah was revealed?" But when a categorical Surah is revealed that mentions war, you should see those who are sceptical staring at you like a man in the swoon of death. Alas the woe for them!

Obedience and modest speech (would have been more becoming). And when the matter has been determined it is best for them to be true to God.

Is it possible that if placed in authority you will create disorder in the land and sever your bonds of relationship?

They are those who were condemned by God, whose ears were blocked by Him and their eyes blinded.

Do they not ponder on what the Qur'an says? Or have their hearts been sealed with locks?

Those who turn their backs after the way of guidance has been opened to them, have been surely tempted by Satan and beguiled by illusory hopes.

This was so because they said to those who disdain what God has revealed: "We shall obey you in some things." But God knows their secret intentions well.

How will it be when the angels draw out their souls striking their faces and their backs?

Because they followed what displeases God, and they were averse to pleasing Him. So We nullified their deeds.

Do they whose minds are filled with doubt, think that God will not expose their malice?