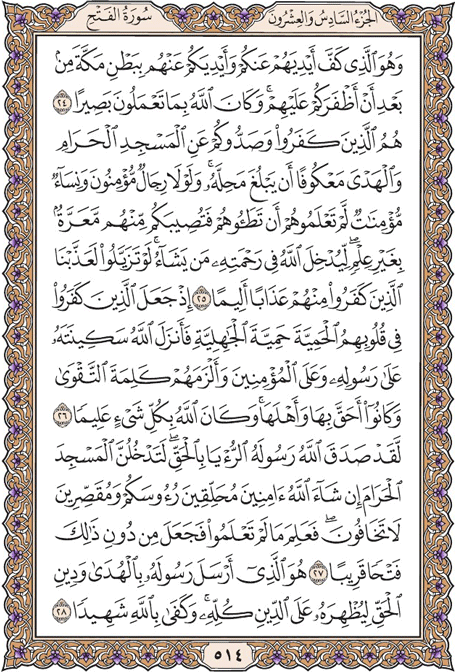 It was He who restrained their hands from you in the heart of Makkah, and your hands from them, after He had given you victory over them, as God sees all that you do.

It were those who disbelieved who hindered you from (going to) the Holy Mosque, preventing your offerings from arriving at the place of sacrifice. Had it not been for (the presence of) believers, men and women, (among the unbelievers) of whom you were unaware, and whom you might have trampled and thus incurred guilt unknowingly on account of them, (the matter would have been settled). (But this was not done) so that God may admit into His favour whom He willed. If these (believers) had been separated from them, He would have inflicted a grievous punishment on the unbelievers.

When the unbelievers fostered a sense of honour in their hearts, a sense of pagan honour, God sent down a sense of tranquility on His Apostle and the believers, and obliged them to an act of self-restraint, for they were deserving and worthy of it. God is cognisant of everything.

God has truly made the vision of His Apostle come true: You will surely enter the Holy Mosque in security if God please, without any fear, having shaved your heads and cut your hair. He knew what you did not know, and has vouchsafed you, apart from this, a victory near at hand.

It is He who has sent His Apostle with the guidance and the true faith, so that He may exalt it over every other creed. God is sufficient as a witness.