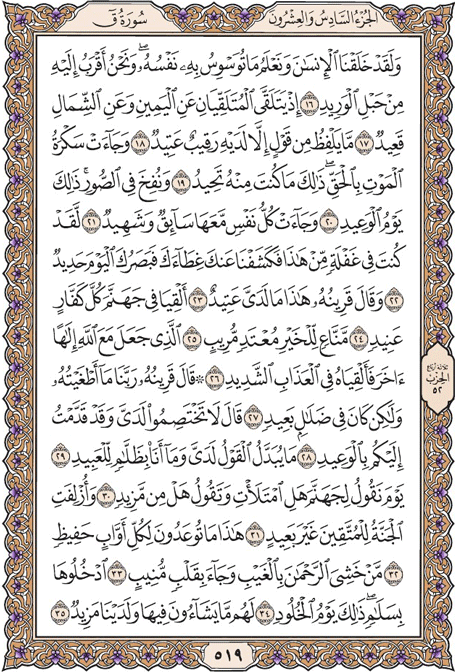 He created man and surely know what misdoubts arise in their hearts; for We are closer to him than his jugular vein.

When the two (angels) who keep the account, one sitting on the right, one on the left, take it down,

There is not a word he utters but an observer is ready (to make note of it).

The palsy of death will surely come. This is what you wished to avert.

And the trumpet blast will sound: It would be the Day of Doom.

Each soul will come with a driver and a witness.

(And the driver will say:) "You were oblivious of this, so we have removed the veil, and how keen is your sight today!"

His companion will say: "Here is (the record) I have ready with me."

"Cast each stubborn unbeliever into Hell," (they will be told),

"Every obstructor of good, transgressor, and the sceptic,

Who had set up another god with God. Cast him into severe torment."

His companion will say: "O Lord, I did not lead him to wickedness, but he was himself far astray."

"Do not argue in My presence. I had announced the promise of doom in advance.

There is no changing of My word, nor am I unjust to My creatures."

We shall ask Hell that day: "Are you full?" It will answer: "Are there still more?"

And Paradise will be brought near, not far from those who took heed for themselves and feared God.

"This is what you had been promised," (will be said) to every penitent who remembered (his duty),

Who feared Ar-Rahman in secret, and came with a penitent heart:

"Enter it in peace. This is the day of life abiding."

Theirs will be whatsoever they wish: And with Us there is more.