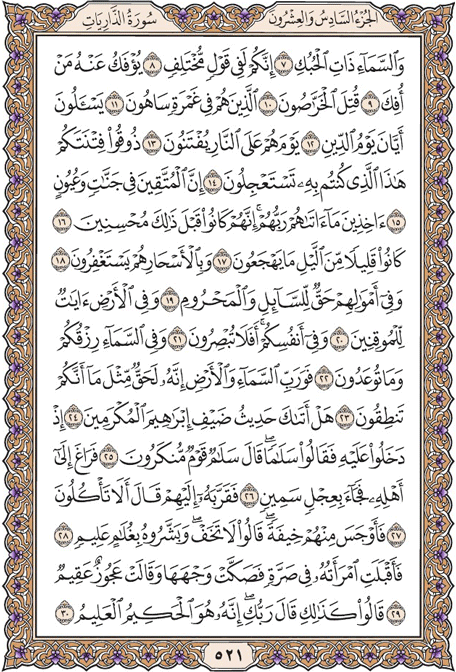 The heavens webbed-with-tracks is witness

You are surely caught in contradictions.,

From which only he turns who is turned away.

Perish will those who just guess and speculate,

Who are lost in deception.

The day they will be burnt in the Fire,

(And told:) "Taste your punishment. This is what you were trying to hasten."

Surely those who fear God and follow the straight path will be amidst gardens and fresh springs of water,

Receiving what is given them by their Lord. They were surely the virtuous before this.

They slept little in the night,

And every morning asked forgiveness,

In whose wealth the suppliant and the deprived had a share.

There are signs in the earth for those who are firm in their faith,

And within yourselves. Can you not perceive?

There is in the heavens your sustenance, and whatever has been promised you.

By the Lord of the heavens and the earth, this is certainly true even as you speak.

Has the story of Abraham's honoured guests come to you?

When they came to him, they said: "Peace." He answered: "Peace." They were a people he did not recognise.

So he hurried to the house and brought a fatted calf,

And placing it before them said: "Won't you eat?"

He felt afraid of them; but they said: "Have no fear," and gave him the good news of a wise son.

His wife came out lamenting, striking her forehead, and said: "I, am old and barren woman?"

They said: "Thus said your Lord. He is indeed all-wise and all-knowing."