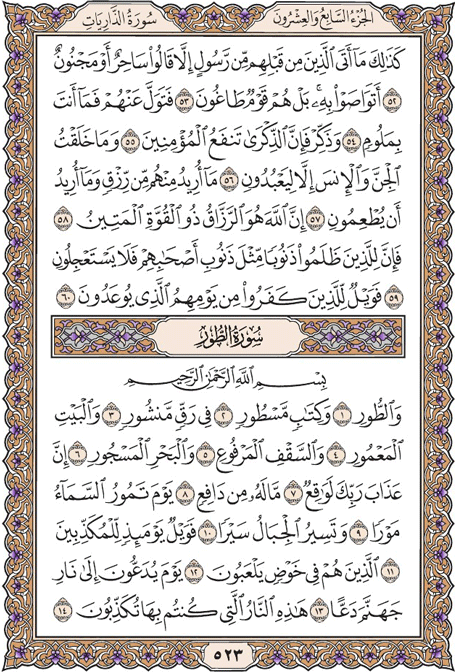 Even thus no apostle came to those before them but they said: "He is a sorcerer or a mad man."

Is this the legacy they have passed down from one to the other? In fact, they are a rebellious people.

Turn away from them. You will not be blamed.

But go on reminding them, as reminding benefits the believers.

I have not created the jinns and men but to worship Me.

I want no sustenance from them nor do I want them to feed Me.

God is certainly the great provider, Lord of strength and power.

Those who do wrong will indeed come to the same end as their fellows (of old). So let them not ask Me to hasten (the punishment).

Alas the woe for those who refuse to believe in the Day which has been promised them.

I CALL TO witness the Mount Sinai,

And the Scripture inscribed

On a parchment scroll unrolled,

And the swollen sea,

The punishment of your Lord is certain to come.

There is none who could avert it.

The day the sky will tremble,

The mountains move and fly away,

Will be the day of woe for those

Who, ignoring the Reality, engage in pleasantries.

The day they are dragged and pushed into Hell,

(And told:) "This is the fire which you denied.