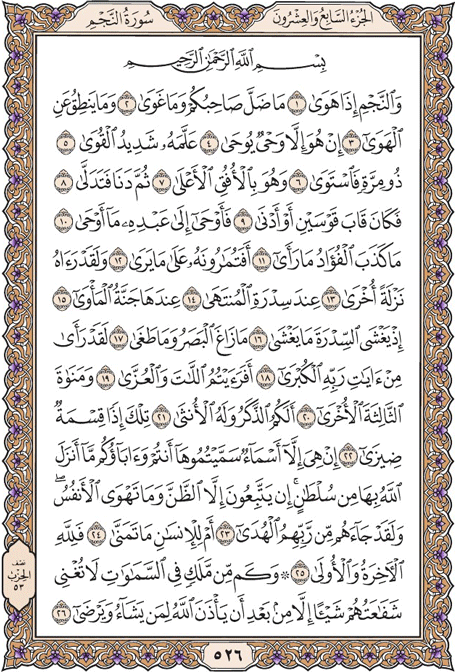 That your companion is not confused, nor has he gone astray,

Neither does he speak of his own will.

This is only revelation communicated,

Bestowed on him by the Supreme Intellect,

Lord of power and wisdom. So he acquired poise and balance,

And reached the highest pinnacle.

Then he drew near and drew closer

Until a space of two bow (arcs) or even less remained,

His heart did not falsify what he perceived.

Will you dispute with him what he saw?

He saw Him indeed another time

By the Lote-tree beyond which none can pass,

Close to which is the Garden of Tranquility,

Neither did sight falter nor exceed the bounds.

Indeed he saw some of the greatest signs of His Lord.

Have you considered Lat and 'Uzza,

And Manat, the other third (of the pagan deities)?

Are there sons for you, and daughters for Him?

This is certainly an unjust apportioning.

Can ever man get what he desires?

To God belong the End and the Beginning.

These are only names which you and your fathers have invented. No authority was sent down by God for them. They only follow conjecture and wish-fulfilment, even though guidance had come to them already from their Lord.

Many as the angels be in heaven their intercession will not avail in the least without God's permission for whomsoever He please and approve.