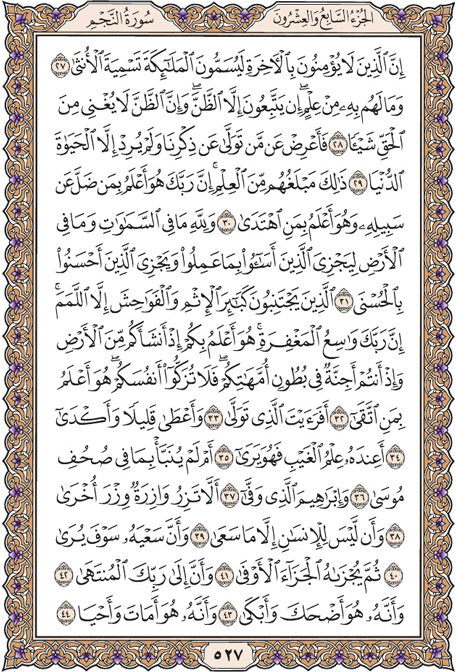 Those who do not believe in the Hereafter give the angels names of females.

So you turn away from him who turns away from Our rememberance and wants nothing but the life of this world:

This is the farthest limit of their knowledge. Surely your Lord alone knows best who has strayed away from the path and who has come to guidance.

To God belongs whatever is in the heavens and the earth, that He may requite those who do evil, in accordance with their deeds, and those who do good with good.

As for those who avoid the greater sins and shameful acts, except minor trespasses, your Lord's forgiveness surely has great amplitude. He is fully knowledgeable of you as He produced you from the earth, and since you were a foetus in your mother's womb. So do not assert your goodness; he is better who takes heed and preserves himself.

Have you seen him who turns his back,

Who gives but little, and is niggardly?

Has he knowledge of the Unknown that he perceives everything?

Has he not heard what is contained in the Book of Moses,

And of Abraham who fulfilled his trust? --

That no one who carries a burden bears another's load;

That a man receives but only that for which he strives;

That his endeavours will be judged,

And only then will he receive his recompense in full;

And that to your Lord is your returning;

That it is He who makes you happy and morose,

And He who ordains death and life;