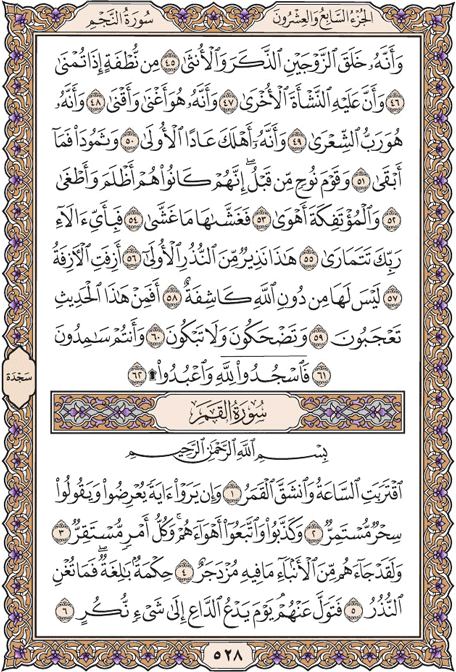 That He created pairs, male and female,

From a drop of semen when emitted;

That the second creation is incumbent on Him;

That it is He who makes you rich and contented;

That He is the Lord of Sirius;

That it was He who destroyed the 'Ad of old,

And Thamud, and did not leave them,

Like the people of Noah before them, who were surely oppressors and rebellious;

And He overthrew the Cities of the Plain,

How many favours of your Lord will you then deny?

He who warns you is one of the warners of old.

What is to come is imminent.

There is no one to unveil it apart from God.

Are you astonished at this news,

And keep laughing and do not weep,

Bow instead in adoration before God and worship Him.

THE HOUR HAS come and split is the moon.

But if they see a sign they turn away, and say: "This is the same old lie continuing,"

And deny, and follow their own vain desires; but every matter is determined at its time.

Messages deterring them from evil had come to them,

Containing consummate wisdom; yet warnings were of no avail.

So turn away from them. When on the Day the crier calls to the painful business,