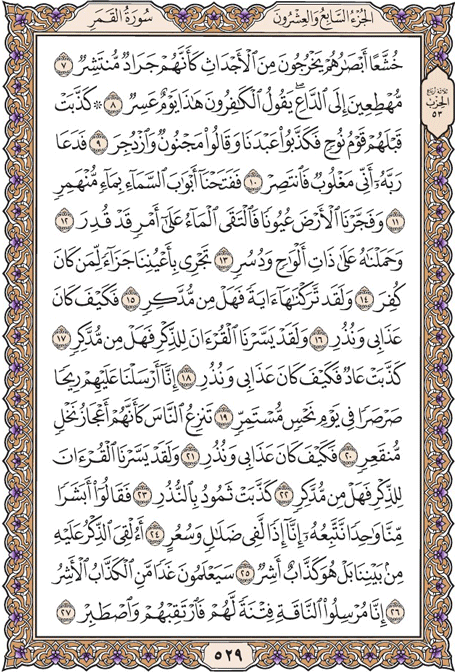 They will come out of the graves with downcast eyes like an expanding swarm of locusts.

They will hasten forward to the caller, gazes fixed. And the unbelievers will say: "This is the day of untold woe."

The people of Noah had denied before them, and had called Our votary a liar, and said: "He is possessed," and repulsed him.

So he prayed to his Lord: "I am helpless, deliver me."

And We opened up the flood gates of the sky with water pouring down in torrents,

And We opened up the springs of the earth; and the waters met for a decreed end.

But We bore him on a (vessel made) of planks and oakum,

Which sailed right under Our eyes: A recompense for him who had been denied.

And We left it as a sign. Is there anyone who will be warned?

How was then My punishment and My commination!

The 'Ad had also disavowed. How was then My punishment and My commination!

We let loose against them a violent roaring wind on a day of ill omen, continuous,

Which snatched away men as though they were palm trees pulled out by the roots.

How was then My punishment and My commination!

Easy have We made the Qur'an to understand: So is there any one who will pay heed?

The Thamud rejected the warnings,

And said: "Should we follow only one man among us? In that case we shall he in error and insane.

Was he the one of all of us to have been given the exposition? He is surely an impudent liar."

"Tomorrow they will know who is the impudent liar!

We shall send the she-camel to try them. So watch them, and be constant.