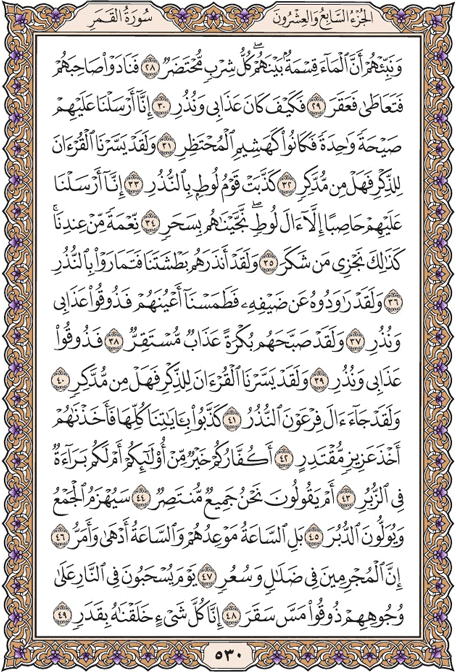 Tell them that the water is to be apportioned between them (and her); and every turn of drinking will be fixed (for each)."

But they called their commander, who seized and hamstrung her.

How was then My punishment of which they had been warned?

We sent a single blast against them, and they were reduced to husks of a decayed fence.

The people of Lot rejected the warnings.

We sent a stone-hurtling storm against them, except the family of Lot whom We saved in the early hours of the morning

As a favour from Us. That is how We reward the grateful.

He had warned them of Our might, but they passed over the warnings.

They lusted after his guests, so We put out their eyes (and said): "Taste My punishment and My commination."

And early in the morning the decreed punishment came upon them.

So now taste My punishment and My commination!

The warnings came to the people of Pharaoh.

They rejected each one of Our signs. So We seized them with the grip of one mighty and powerful.

Are the unbelievers among you any better than they? Or is there immunity for you in the Scriptures?

Or do they say: "We are a well-accoutred army?"

The army will be routed and put to flight.

Surely the Hour will be the moment of their promise, and that moment will be calamitous and distressing.

Surely the sinners are misguided and insane.

On that Day they will be dragged into the fire faces foremost, (and told:) "Taste the feel of Hell."

We have indeed created all things by measure;