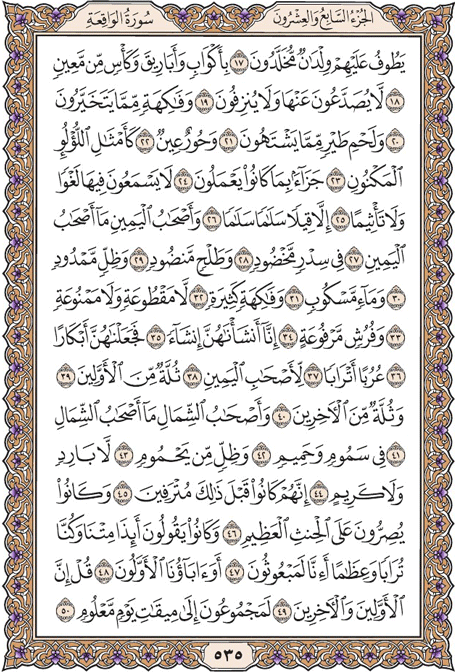 Youths of never-ending bloom will pass round to them

And such fruits as they fancy,

Bird meats that they relish,

And companions with big beautiful eyes

As recompense for all they had done.

They will hear no nonsense there or talk of sin,

Other than "Peace, peace" the salutation.

They will be in (the shade) of thornless lote

And acacia covered with heaps of bloom,

We have formed them in a distinctive fashion,

And made them virginal,

For those of the right hand.

A crowd of earlier generations

And a crowd of the later.

Will be in the scorching wind and boiling water,

Under the shadow of thick black smoke

Neither cool nor agreeable.

They were endowed with good things

But persisted in that greater sin,

And said: "What! When we are dead and turned to dust and bones, shall we then be raised again?

And so will our fathers?"

Say: "Indeed, the earlier and the later generations

Will be gathered together on a certain day which is predetermined.