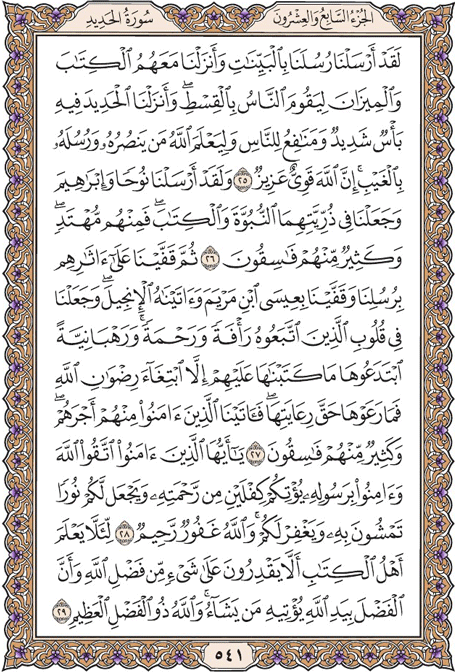 We have surely sent apostles with clear signs, and sent with them the Book and the Balance, so that men may stand by justice; and We sent down iron which causes much distress but also has advantages for men, so that God may know who helps Him and His apostles in secret. Verily God is all-powerful and all-mighty.

We sent Noah and Abraham, and gave prophethood to their progeny and the Book, and some of them are well-directed, but many of them are disobedient.

Then in their train We sent Our apostles, and succeeding them Jesus, son of Mary, and gave him the Gospel, and put into the hearts of his followers compassion and kindness. But they created monasticism which had not been prescribed for them by Us except for seeking the pleasure of God; yet they did not observe it as it should have been rightly observed. So We gave those among them who were believers their reward; but most of them are disobedient.

O you who believe, have fear of displeasing God, and believe in His Prophet. He will give you twice as much of His bounty and place a light for you to walk in, and forgive you, for God is forgiving and kind;

So that the people of the Book may know that they have not the least power over the bounty of God, and that the bounty is wholly in the hands of God to give whosoever He please, for God is the master of infinite bounty.