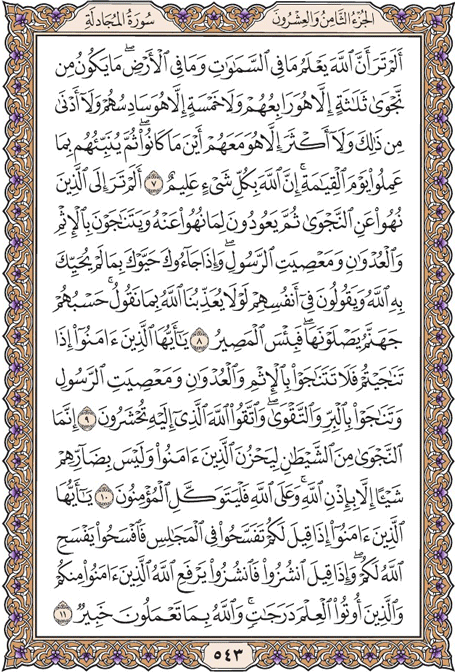 Have you not considered that God knows whatever is in the heavens and the earth? No three persons confer secretly but He is the fourth among them, and no five but He is the sixth; and neither fewer nor more but He is with them wheresoever they be. And on the Day of Judgement He will announce their deeds to them. Verily God has knowledge of everything.

Have you not considered those who were forbidden to conspire, but reverted after a time to what was forbidden them, and conspired evil, rebellion and disobedience to the Prophet? Yet when they come to you they greet you with a greeting even God does not greet you with; and say to themselves, "Why doesn't God punish us for what we say?" Hell is sufficient for them, in which they will be burnt: And what an evil consequence!

O you who believe, when you converse privately, do not talk of iniquity, rebellion, and disobedience to the Prophet, but talk of goodness and piety, and fear God before whom you will be gathered.

Surely scheming is the work of Satan that he may cause the faithful grief; but he cannot harm them unless God dispense. So in God should the believers place their trust.