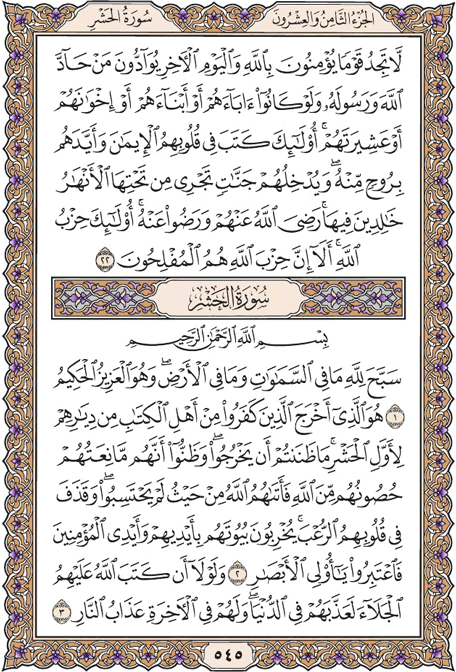 You will not find those who believe in God and the Day of Resurrection, loving those who oppose God and His Prophet, even though they be their fathers, sons, or brothers or their kin. God has inscribed on their hearts belief, and has succoured them with His own grace, and will admit them to gardens with rivers flowing by, where they will abide for ever, God accepting them, and they, happy in the pleasure of God. They are verily the army of God. Will not the army of God be victorious?

WHATEVER IS IN the heavens and the earth sings the praises of God. He is all-mighty and all-wise.

It is He who drove those among the people of the Book who refused to believe, from their homes for the first confrontation. You did not think that they would go away, and they imagined that their forts would protect them against God. But God came upon them from where they did not suspect, and filled their hearts with terror, so that they destroyed their homes with their own hands (or were destroyed) by the hands of believers. So take heed, O men of sight!

Had God not decreed the expulsion for them He would have punished them in this world, and in the next the punishment of Hell would have been theirs.