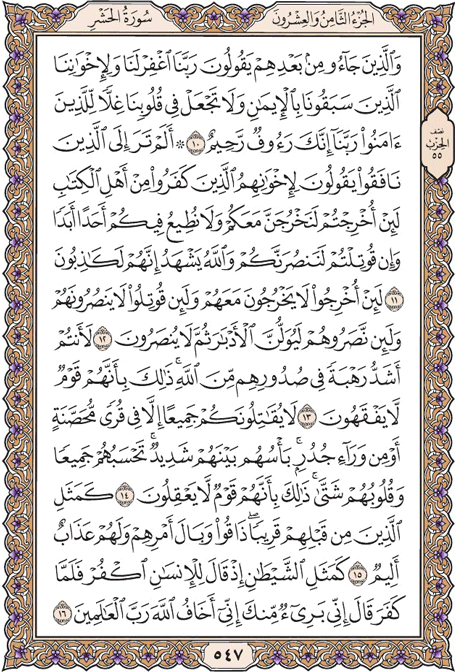 (And the spoils are for) those who came after them, who say: "O Lord, forgive us and our brothers who came to faith before us, and do not put a grudge in our hearts against those who believe O Lord, You are compassionate and kind."

Have you never considered the hypocrites? They say to their brethren among the people of the Book who do not believe: "If you are driven out we shall go with you, and will not listen to any one in what concerns you; and if there is war against you, we shall aid you." But God is witness they are liars.

Surely they have greater fear of you in their hearts than of God, because they do not understand.

They will not fight you in a body except in fortified cities, or from behind the walls. Their enmity among themselves is great. You think they are united, but divided are their hearts. That is because these people are devoid of sense,

Like those who had tasted the gravity of their actions a little before them. There is a grievous punishment for them.

(They are) like Satan who says to man: "Do not believe;" and when he becomes a disbeliever, he says: "I have nothing to do with you. I fear God, the Lord of all the worlds."