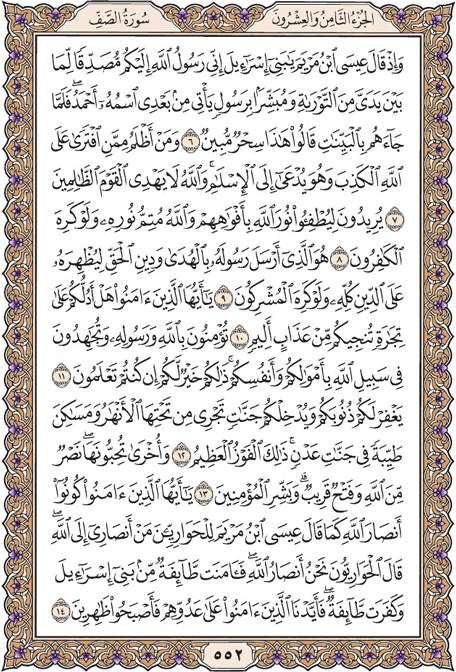 And when Jesus, son of Mary, said: "O children of Israel, I am sent to you by God to confirm the Torah (sent) before me, and to give you good tidings of an apostle who will come after me, whose name is Ahmad (the praised one)." Yet when he has come to them with clear proofs, they say: "This is only magic."

Who is more unjust than he who invents a lie against God when he is called to submit? God does not show the evil-doers the way.

They want to extinguish the light of God by uttering blasphemies. But God wills to perfect His light, however the unbelievers may dislike it.

It is He who sent His Apostle with the guidance and the true way to raise it above all faiths, however the idolaters may dislike it.

O you who believe, may I offer you a bargain which will save you from a painful punishment?

Come to believe in God and His Apostle, and struggle in the cause of God, wealth and soul. This will be good for you, if you can understand.

He will forgive you your sins and admit you to gardens with rivers flowing by, and excellent mansions in the garden of Eden. This will be a great fulfilment.

And (He will give you) what is dearest to you -- help from God and early victory. So give good tidings to those who believe.

O you who believe, be helpers of God, as Jesus, son of Mary, had said to the disciples: "Who will help me in the way of God?" and they had answered: "We are the helpers of God." Then a section among the children of Israel believed, but a section among them did not. So We helped those who believed against their enemies, and they prevailed over them.