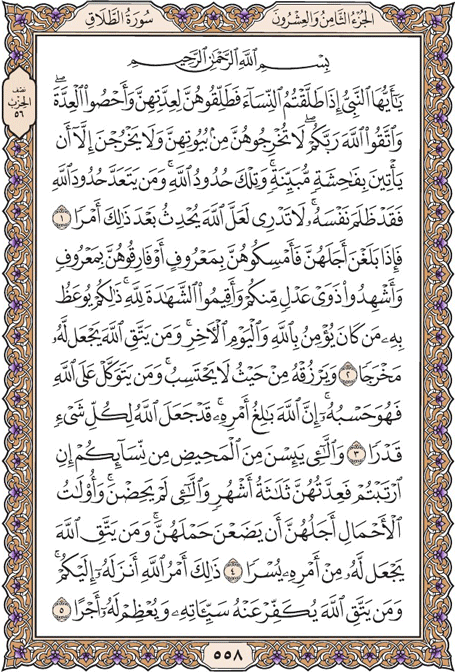 O PROPHET WHEN you divorce women, divorce them at their appointed period, and calculate that period, and fear God, your Lord. Do not expel them from their houses, nor should they go away themselves, unless they are openly guilty of adultery. These are the limits set by God. Any one who exceeds the limits set by God sins against his own self. You never know that God may perchance lead to a new situation after this.

When they have reached their appointed time, then either keep them lawfully or let them go honourably; but have two witnesses from among you, and give truthful evidence for (being acceptable to) God. This is to warn him who believes in God and the Last Day. God will furnish a way out for him who fears Him,

And provide for him from where he does not reckon. God is sufficient for him who places his trust in Him. Certainly God fulfills His purpose. God has indeed fixed a measure of everything.

This is the commandment of God that is sent down to you. God will forgive the ills of those who fear Him, and increase their reward.