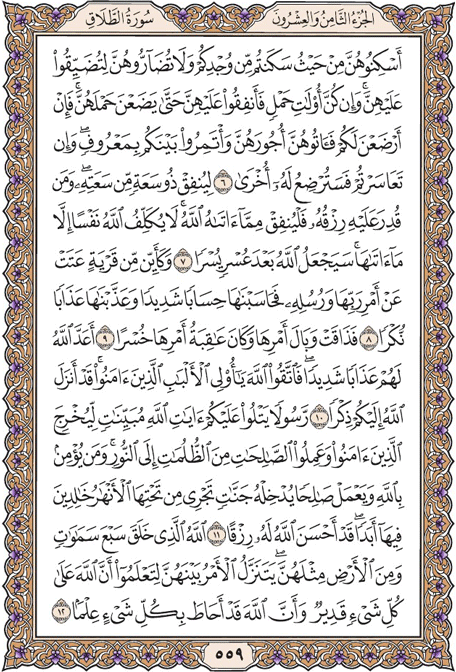 House the (divorced) women where you live, according to your means; but do not harass them so as to reduce them to straitened circumstances. If they are pregnant, then spend on them until they give birth to the child. And if they suckle the child for you, then make the due payment to them, and consult each other appropriately. But if you find this difficult, let some other woman suckle (the child) for her.

How many habitations rebelled against their Lord's command and His apostles; but We took them to severe task, and punished them with the harshest punishment.

So they tasted the pain of their actions; and the consequence of their deeds was ruin.

God has prepared for them severe punishment. So, you men of wisdom, and those who believe, take heed for yourselves and fear God. God has indeed sent down a Reminder for you,

An Apostle who recites before you the explicating revelations of God that He may bring those who believe and do the right out of darkness into light. Whosoever believes in God and does the right, He will admit into gardens with rivers flowing by, where they will abide for ever. How excellent a provision has God made for him

It is God who created several skies, and as many earths. The commandment is sent down among them so that you may know that God has power over everything, and everything is held within the knowledge of God.