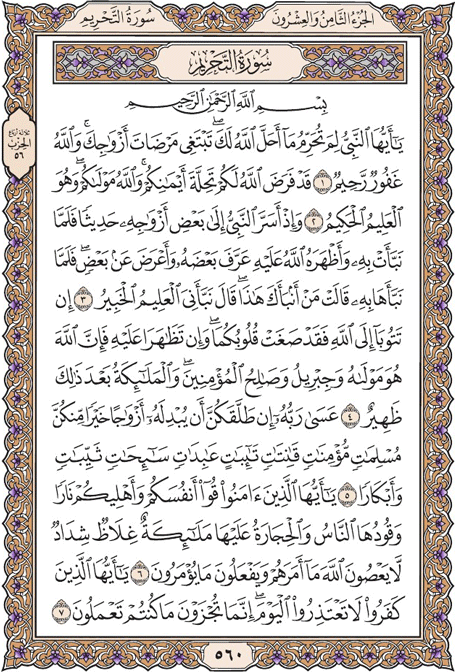 O PROPHET, WHY should you forbid (yourself) what God has made lawful for you, in order to please your wives? Yet God is forgiving and kind.

Surely God has sanctioned the dissolution of your vows. God is your Lord: He is all-knowing, and all-wise.

When the Prophet told one of his wives something in confidence and she disclosed it, God revealed this to him. So he made some of it known to her, and held back some. When, however, he informed her about it, she asked: "Who told you this?" He said: "I was told this by the All-knowing, All-Informed."

If both of you two (women) turn to God in penitence (it would be better). Your hearts have been impaired; and if you assist one another against him, then surely his helper is God, and Gabriel and the righteous believers, and, besides them, the angels are his helpers.

In case he divorces you, his Lord will give him better wives in return, who will be modest, true believers, obedient to God, repentant, observant of prayer and fasting, both widows and virgins.

O you who believe, save yourselves and your families from the Fire whose fuel is men and rocks, over which are appointed angels stern and severe as wardens who never disobey what God commands them, and do what they are commanded;

(And say:) "O you who do not believe, make no excuses today. You will be requited only for what you had done."