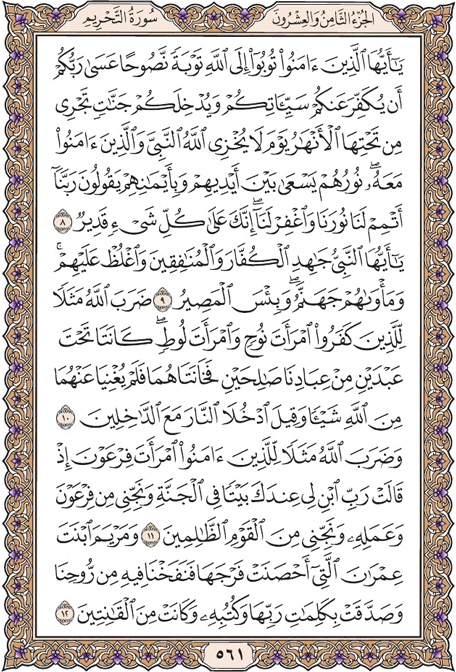 O you who believe, turn to God truly in repentance. Perhaps your Lord may forgive your ills and admit you to gardens with rivers flowing by on the day when God will not humiliate the Prophet and those who believe with him. Their light will move in front of them and to their right, and they will say: "O Lord, perfect our light and forgive us. You have power over every thing."

O Prophet, fight the unbelievers and the hypocrites, and be severe with them. Their abode is Hell, an evil destination?

God advances the example of Noah's wife and the wife of Lot for those who do not believe. They were married to Our two pious devotees, but they were unfaithful to them, and even (the apostles) could not avail them in the least against God; and it was said to them: "Enter Hell with those (who are condemned) to enter it."

And of Mary, daughter of 'Imran, who guarded her chastity, so that We breathed into her a new life from Us, and she believed the words of her Lord and His Books, and was among the obedient.