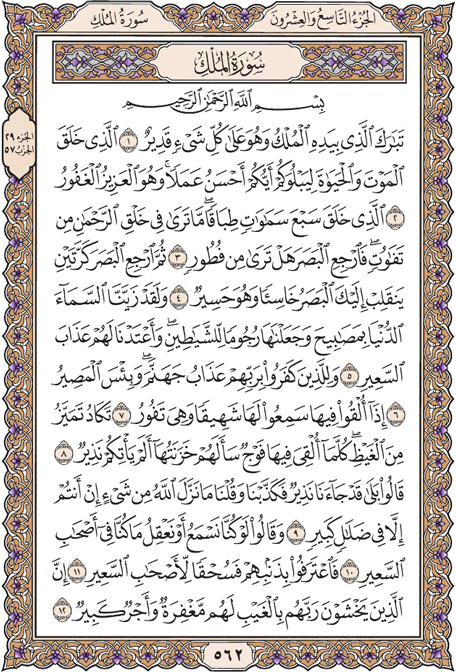 BLESSED BE HE who holds the (reins of) Kingship in His hand, who has power over everything,

Who created death and life in order to try you to see who of you are best of deed. He is all-mighty and forgiving,

Turn your eyes again and again. Your gaze turns back dazed and tired.

We have adorned the lowest sky with lamps, and made them missiles against the devils, for whom We have prepared a torment of most intense fire.

For those who believe not in their Lord there is the punishment of Hell; and what a wretched destination

When they are cast into it, they will hear it roar and raging

As though it would burst with fury. Every time a crowd is thrown into it, its wardens will ask: "Did no warner come to you?"

And they will answer: "Surely; a warner came to us, but we denied him, and said: 'God did not send down any thing; you are greatly deluded, in fact.'"

They will say: "If we had listened and been wise, we would not have been among the inmates of Hell."

So will they confess their guilt. Deprived (of all joys) will be the inmates of Hell.

For those who fear their Lord in secret is forgiveness and a great reward.