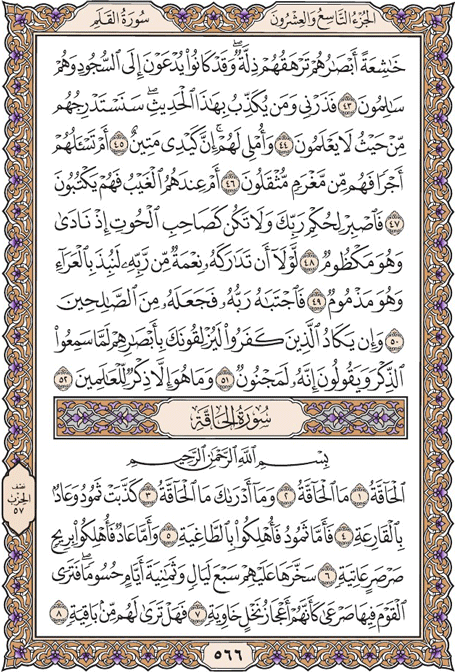 Lowered will be their eyes, disgrace overwhelming them. They had indeed been called to bow in homage when they were free of blame.

So leave those who deny this Discourse to Me. We shall lead them step by step to (ruin) in a way they will not know.

Yet I will give them respite: Surely My plan is compact.

Do you ask for any compensation from them that they are burdened with want?

Or do they have knowledge of the unknown which they copy down?

So wait with patience for the judgement of your Lord, and do not be like (onah) of the fish who called (to his Lord) when he was choked with anger.

Had it not been for a favour from his Lord he would have been cast blame-worthy on a barren plain.

Then his Lord chose him and placed him among the upright.

But the unbelievers would like to stare you out of balance when they hear the warning, and say: "Surely he is possessed;"

Whilst it is no more than reminder for the people of the world.

What is the concrete reality?

What do you comprehend by the concrete reality?

The Thamud and 'Ad denied the consequential calamity.

So destroyed were the Thamud by a storm of thunder and lightning;

Which He sent to assail them for seven nights and eight days running. You should have seen the people prostrate like the decayed trunks of date-palm trees.

Do you see any trace of them?